Luana and I cowrote this film. There's a scene in it where I am playing a student of soybeans and I ask her "Is it true soybeans could one day end world hunger?" and she plays the soybean teacher. Luana was hilarious, at least to me, in everything she did. There are some great clips here, so sit back and enjoy her company. 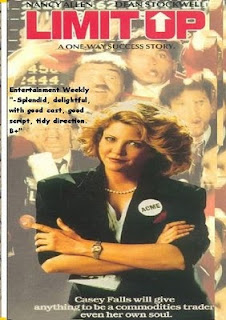 Twenty years ago, a group of people came together to make a little fable about capitalism, about how hard it was for a woman to become a soybean trader at the Chicago board of trade, about racism. The cast includes the amazing Danitra Vance (Colored Girls on Broadway in the 70's), who plays the guardian angel of Nancy Allen. Ray Charles plays God. It's a paean to Chicago, an homage to the soybean pit where my brother toiled for many years. The original cast was Daymon Wayans and Sharon Stone, but the producer wouldn't let me cast them. Either way, it's a PG13 family flick, Brad Hall, Ron Howard's dad Rance are hilarious - Dean Stockwell, Nancy Allen are a hoot - "cornball" as Ebert puts it, but hey, something to be said for the only film ever made about soybean trading.. I still have no idea why anyone would hate this film. Luana Anders co-wrote the film and plays a bit part in it. Entertainment Weekly gave it a B+ - but sadly, it's disappeared into the great cinema vault in the sky.

Knock on wood, MGM will dust it off and put it out on DVD!  Fingers crossed.
Posted by Curated Content at 10:45 PM No comments:

Luana starred in this film with Mickey Rooney, never released, but now on demand!!!! Enjoy.

Luana playing a NSA Buddhist (which she was for 20 years)

The Pit and the Pendulum

Another short film Luana starred in while I was at USC